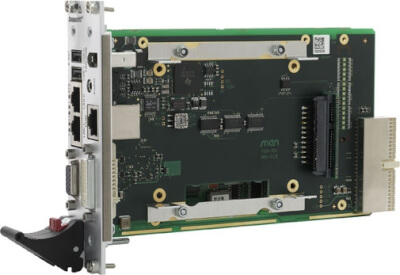 The F604 is a 4HP FireWire and multimedia extension card for 3U Intel® based CompactPCI® single-board computers. It can be used in combination with the F14 and further boards of the Intel® low power family. The IEEE 1394 high-speed serial bus is often used in combination with modern high-end digital camera equipment instead of USB. Thus, the F604 side-card extends the standard features of a powerful multi-core or Pentium® M CPU board by one 400 MBit/s FireWire interface connected via PCI Express® links. It further provides a DVI-D single link port, an HD audio - in or out - port as well as one, optionally two COM interfaces. In addition an onboard 2.5" SATA hard-disk slot is available on the F604. The F604 is directly plugged to the right side of the respective single-board computer. A robust connector makes for high mechanical stability. It is delivered with an 8HP front panel, replacing the 4HP front panel of a 3U single-board computer and thus resulting in a solid one-piece front panel. 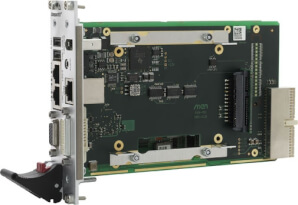