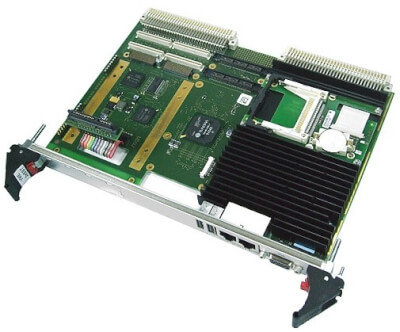 The A19 6U single-slot VMEbus SBC supports a variety of Intel® Core™ Duo and Core 2 Duo processors from the high-end 2.16 GHz T7400 to the low-voltage dual-core versions down to a selection of single-core Celeron® M types. It is designed especially for systems which require high computing and graphics performance and low power consumption in a typical Windows® environment or under VxWorks®

The standard I/O available at the front panel of the A19 includes graphics on a VGA connector, two Gigabit Ethernet and two USB 2.0 interfaces.

The I/O of the A19 can directly be extended by different mezzanine cards. Mezzanine functions specifically include another two Gigabit Ethernet channels available at the optional P0 rear connector to support Ethernet on the backplane complying with ANSI/VITA 31.1-2003 as well as four USB 2.0 ports, one of which can alternatively be used to realize a UART. Further mezzanine functions may also include digital video outputs for flat panel connection via DVI, and HD audio.

In terms of mass storage two SATA ports (one onboard instead of the PMC or XMC and one on the mezzanine card) are available for connection of an onboard hard disk or for building up RAID systems. One PATA interface supports the onboard CompactFlash® slot.

The working memory comprises up to 4 GB DDR2 DRAM which is soldered to guarantee optimum shock and vibration resistance.

A total of six PCI Express® lanes for high-speed communication (such as Gb Ethernet) are supported on the A19. 2 x1 PCIe® links are used for the two onboard Ethernet interfaces, another 2 x1 links support the XMC slot, 1 x1 link is available on a specific mezzanine card and 1 x1 link is used for connection of the VMEbus bridge. 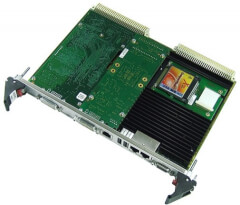 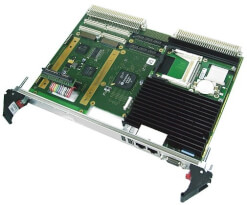