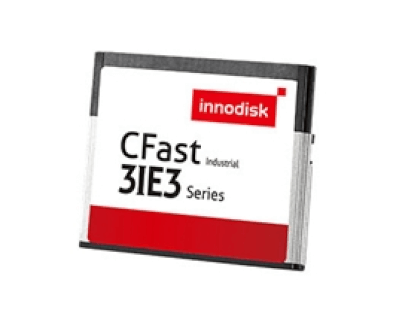 The Innodisk CFast 3IE3 operates at SATA III 6.0 Gb/s, which offers data transfer rate of read up to 240MB/s. and of sequential write up to 160MB/s. Compliant with CFast 2.0 standard, it is designed with 7+17 pin connector and is SATA compatible. Due to the idle power saving, it reduces 30% power consumption. CFast 3IE3 is featured as small form factor, and suitable for most industrial application.

CFast 3IE3 can work under harsh environment, and complies with ATA protocol. Without additional drives, the disk can be configured as a boot device or data storage device. CFast 3IE3 support hardware write protect to prevent modification of valuable data on a device. Besides, through Innodisk's enhanced power cycling technology and more capacitors, CFast 3IE3 prevents data loss caused by sudden power failure. By using Innodsik's iSMART, users can not only monitor the operation status of CFast, but also visualize Wear-Leveling status with graphics.