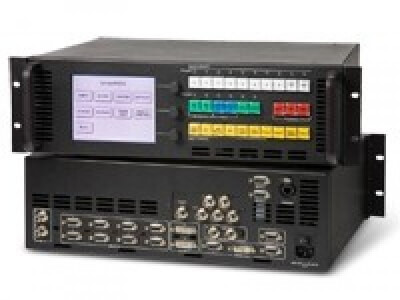 ScreenPRO-II uses four image layers (unscaled background, up to two scaled PiPs or keys, and an unscaled downstream key) to produce sophisticated effects, including live transitioning backgrounds, transitioning PiP windows, wipes, dissolves and keys. An internal 8x2 analog video router provides universal analog sources to each scaler schannel. Barco's ScreenPRO-II features a low video processing delay of three input fields maximum. With the EOC, the ScreenPRO-II can use the DVI background channels as inputs to the scaler channels, adds HD-SDI and interlaced output for recording, and can have storage for 100 logo stills.

Using the mixer’s two scalers, you have the flexibility to mix or key HD-SDI, DVI, and analog source on top of the transitioning background, or display two independent PIPs (or Keys) over a background. In addition, two unscaled high-resolution layers enable you to transition seamlessly between backgrounds, or use a background plus a high-resolution DSK.

With ScreenPRO-II, the term 'seamless' goes far beyond the system’s ability to create clean, glitch-free switches between inputs. With a typical single-format switcher (such as an all-SDI system), 'seamless' is easy - because input timing is uniform. However,  when multi-format and multi-resolution sources are connected simultaneously, the clean switching challenge arises, and that is precisely where ScreenPRO-II shines.

The EOC card provides an additional output that can be programmed to a different resolution from the Main/Preview outputs. The additional output is provided on the SD/HD/3G/BarcoLink and five-wire formats. The EOC card also enables the DVI inputs to be routed to the scaler channels. Finally, the EOC includes a memory card allowing the storage of up to 100 logo stills.