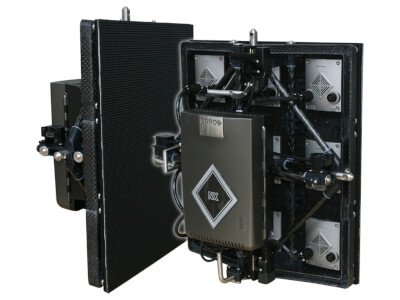 The NX-series have set a new standard for indoor LED displays by offering the deepest black levels available on the market, and pairing this with a phenomenal contrast ratio of over 4,000:1. With a light output of over 2,000 Nits and native 16-bit color processing, it is sure to deliver the pinnacle of image quality in any indoor setting. In addition, the NX-series guarantee easy, quick installation and are lightweight by design.

With the NX series, Barco has developed a true black LED – not just a black package. With its new black shaders and black silicon resin, each LED outputs the deepest blacks and brightest luminance levels of any product on the market. NX-6 has a phenomenal contrast ratio of 4200:1 and a calibrated light output of 2000 Nit.

To complement the NX series’ new LED display benchmark, Barco has engineered the industry’s new structural benchmark — the “Mag-frame”. It is built of carbon fiber and is designed in a framework — rather than a box. The result is a support system far stronger, far lighter, and ten times less sensitive to deformation than the current “metal” structures.

With the Mag-frame, LED modules connect directly to the structure via high-strength “neo” magnets, rather than traditional screws. No tools are required for mounting or removal. With each magnet capable of holding over 1000 times its own mass, the result is precise positioning, super easy setup, and a totally seamless display.

The NX tiles can be used either as a standard integral display, or split apart for creative designs. And when used in conjunction with Barco’s Director Toolset, you can build displays of any shape or form — limited only by your imagination.

By running the LEDs at lower temperatures, extremely high brightness levels are achieved at much lower currents. Within the LED itself, the use of silicon instead of epoxy resin also slows the aging process, and provides a greater degree of reliability in humid operating conditions. The NX’s new “tri-color” LED calibration further ensures display stability and uniformity over time.

Each NX LED can deliver up to 281 trillion colors, enabling tiles to reach staggering new levels of color depth, uniformity, and grayscale. Thanks to its 16-bit processing power, NX tiles can be calibrated to a larger color triangle – one that is wider than the HDTV standard - delivering cross rentable tiles with deep, uniform colors across the entire display surface.


Remove the tools, improve the serviceability

No tools or cables are required to set up and secure an NX LED wall, or take it apart for service. And because the Mag-frame is essentially an open structure, there is easy access to every module, the control unit and interface boards. 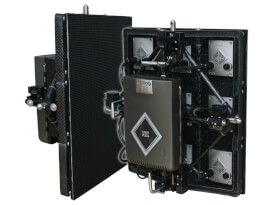