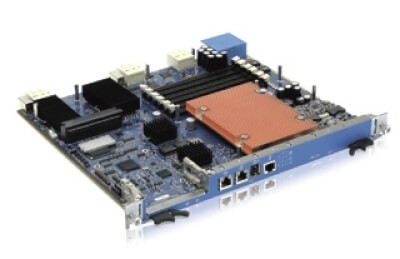 In designing the AT8050 blade, Kontron strove to give clients the best possible options with their common platform business model and maintain a continual competitive edge.

The AT8050 uses a single Intel Xeon L5518 quad-core processor with a 60W power envelope, as opposed to a dual socket approach. The advantages of this are – clients can still make use of the one available AdvancedMC slot for further feature extensions; they can maximize the amount of available memory from 24GB DDR3 Registered ECC VLP SDRAM, up to 48GB DDR3; and, most importantly, clients can swap out their existing node blades with the AT8050 without having to upgrade their chassis platforms, which they would have to do to be able to cool several dual-socket-designed quad-core node blades.

Bottom Line: The Kontron AT8050 provides the most performance and functionality without making sacrifices to power consumption.

The Intel Xeon processor 5500 series brings together a number of innovative technologies to deliver a more intelligent level of performance. Three new features include:

>> Intel® QuickPath Technology and an integrated memory controller speed traffic between processors and I/O controllers for bandwidth-intensive applications, to deliver as much as 25.6 GB/s, up to 3.5x the bandwidth of previous-generation processors.

Intel Turbo Boost Technology adjusts performance levels depending on when and where it’s needed. It does so by adapting the processor frequency to the demands of the application and allows specific cores within each processor to run above the rated frequency.

Various telecom applications lend themselves to parallel, multithreaded execution. Intel Hyper-Threading Technology enables simultaneous multi-threading within each processor core, up to two threads per core or eight threads on a quad-core processor (Figure 2). Hyper threading reduces computational latency, and makes optimal use of every clock cycle.

One (socket) Can be Better than Two

Achieving the best price versus performance is what TEMs look to build into in their applications for media server, 3G and LTE wireless system equipment.
SPEC Performance Benchmark testing by Intel demonstrates that a single Xeon 5500 quad-core series processor primarily performs better than two previous generation Intel quad-core processors. Not only is there better cost optimization with one processor, but clients also win more on-board memory and an AdvancedMC slot for added functionality.

The associated Intel® 5520 chipset, which supports up to 36 lanes of PCI Express* 2.0 and directly assignable I/O for virtualization (VT-d), offers significant new enhancements to accelerate I/O traffic and lower CPU utilization in both native and virtualized environments.

Standard with Kontron blades are full IPMI and supervisory features for remote control capability with power on-off, clean shutdown, warm reset/cold reset controls via any IPMI channels including LAN when the payload power is off. Also available is the Kontron RTM8050, a rear transition module built with a SAS controller to support a Hot Swappable SAS/SATA Hard Disk on the RTM and/or a SAS/SATA AMC module populated in the Kontron AT8050’s one AMC slot. 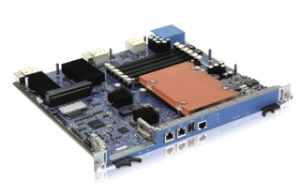